A large proportion of the working population still uses their smartphone after 11 pm. At the same time, 65% of phone alarm clocks ring before 7 am. In every fifth night, smartphone free time is less than 6 hours at a stretch. These are results from a Murmuras study with 860 participants from Germany, where real smartphone data was analyzed. The sleep study ran, with the consent of the test persons, from July until October 2020.

The collected data allows objective insights into German sleeping habits: When does the alarm clock ring in the morning? How often do people snooze it? What are the last used apps in the evening? From when to when is the longest smartphone free time (= max. sleeping time in a row)? 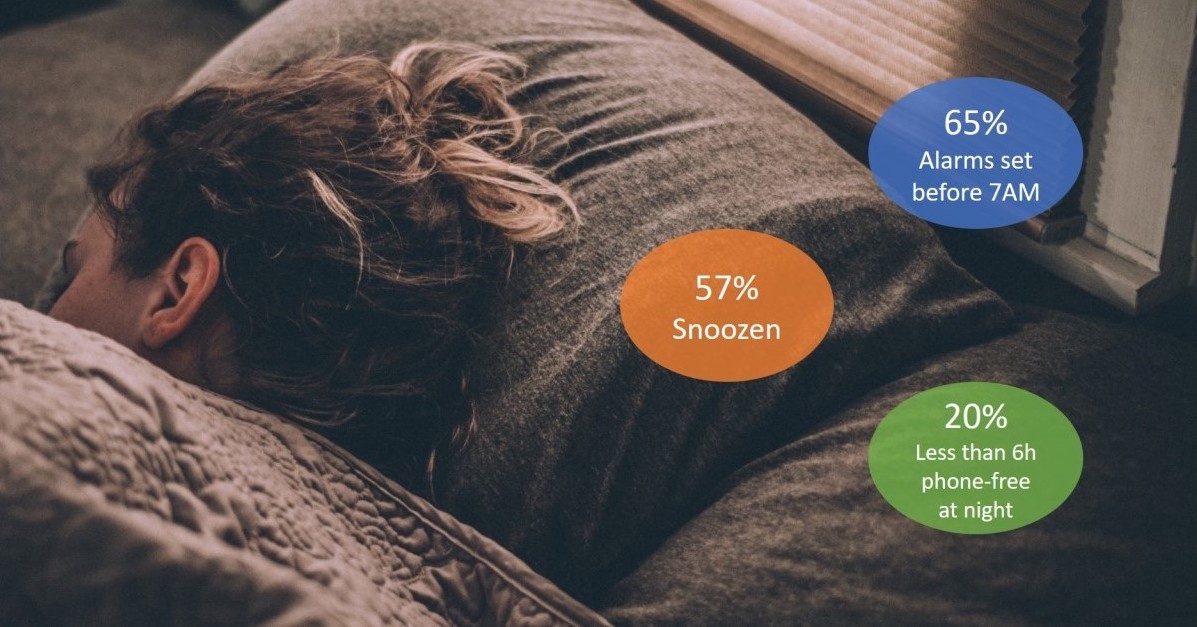 40% of mornings a phone alarm is set

"Buy an alarm clock, banish the smartphone from the bedroom," says Prof. Alexander Markowetz, co-founder of Murmuras and author of the book "Digital Burnout”. Quickly turning off the smartphone alarm, reading WhatsApp messages, YouTube or Instagram – this is how many young smartphone users are spending their mornings in bed. Even though philosopher Henry David Thoreau already noted in the 19th century that the awakening hour is the most memorable season of the day. Despite this century-old insight, the smartphone is often an essential component of the morning routine. Data from the Murmuras sleep study shows, that in 39% of mornings Germans use an alarm clock, on weekdays the value is even higher at 45%. After alarm clock app, WhatsApp is the most popular first application in the morning (18%). 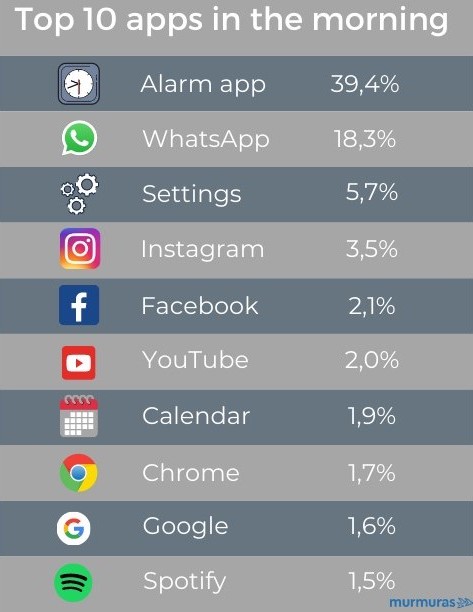 65% of mornings, working people set the alarm earlier than 7 am 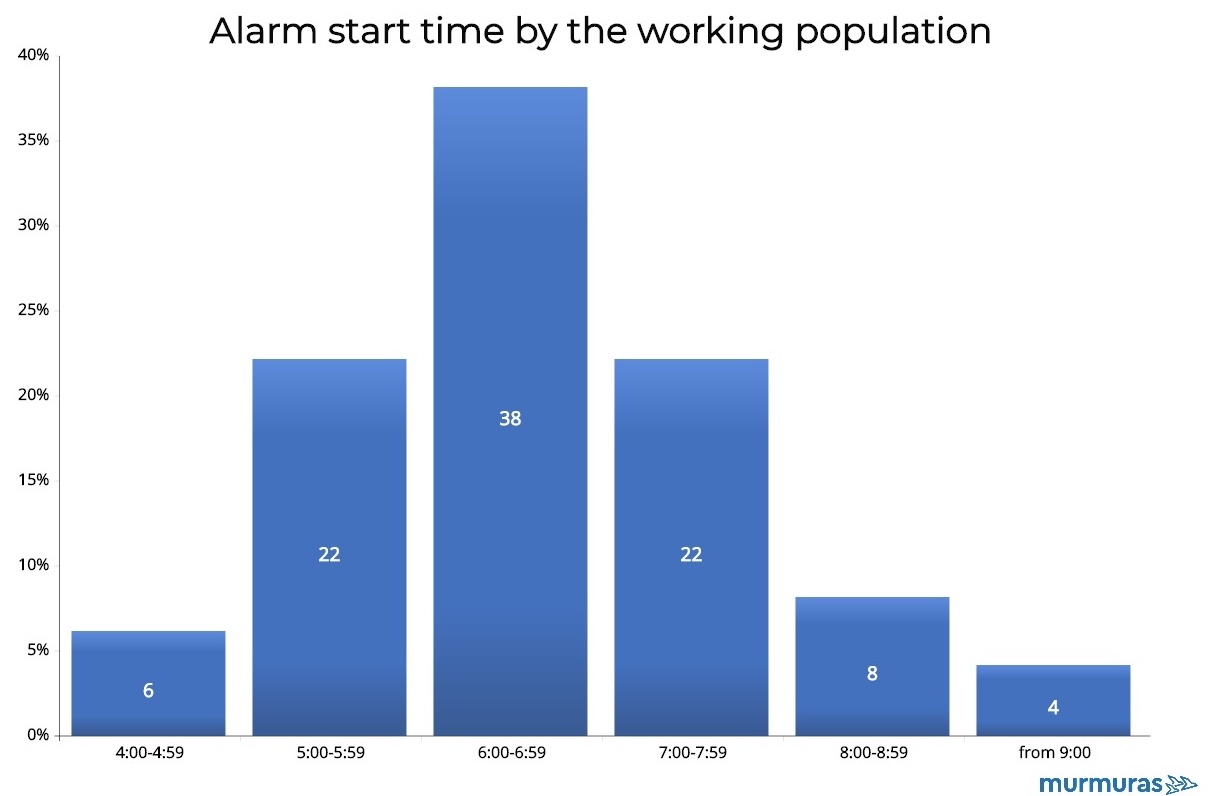 57% snooze in the morning

How often was the phone alarm snoozed in the morning? According to our data analysis in 57% of cases. Also interesting: There was no significant difference between men and women.

The most used app before sleeping time is the alarm clock with 22%, followed by WhatsApp (16%) and social media apps Instagram (7%) and Facebook (5%). 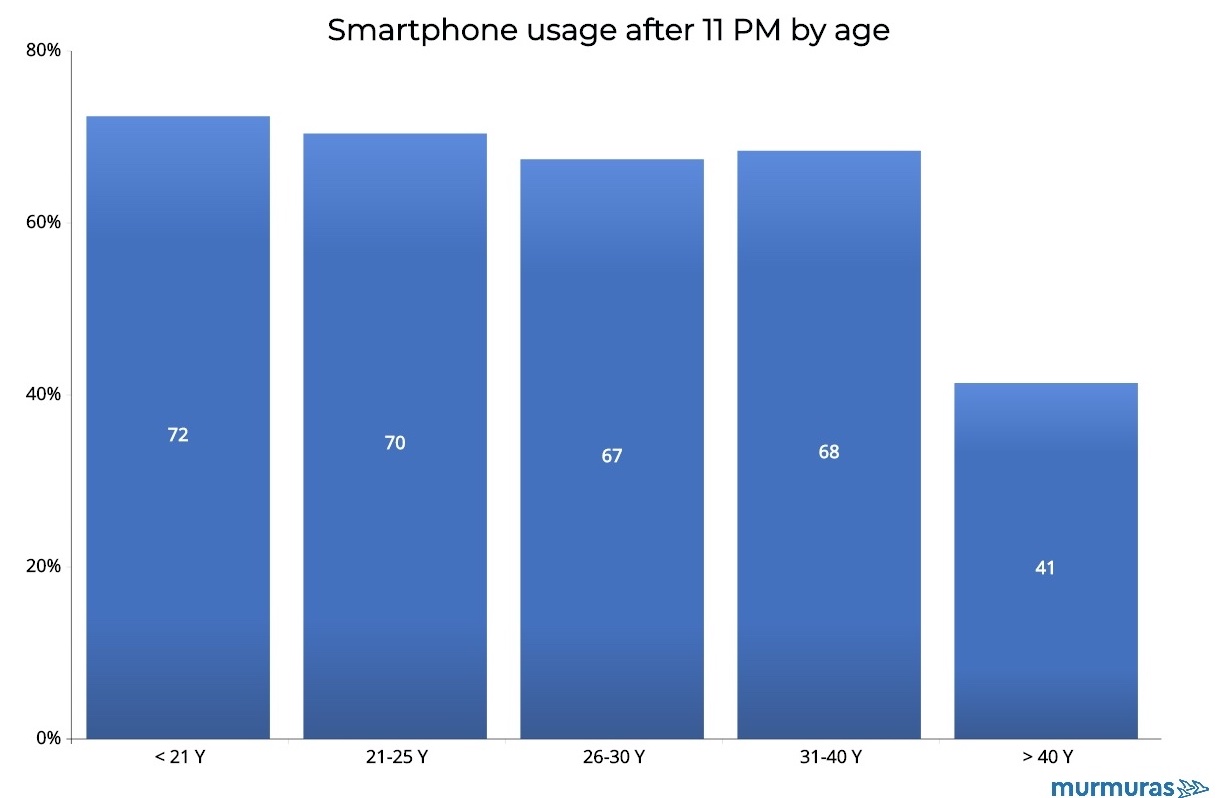 20% of nights, employed persons have less than 6 hours of smartphone-free time

Employed people had less than 6 hours of continuous smartphone-free time every fifth night. According to our measurements, these nights were either interrupted or ended with active app usage. Sessions where only the cell phone start screen was opened are not considered here. Thus, in at least 20% of nights, participants slept less than 6 hours in a row.

For the Murmuras study, 860 test persons agreed to have their smartphone behavior recorded from July until October 2020, accurate to the second. The data was processed in compliance with GDPR and exclusively for scientific purposes. Participants answered socio-demographic questions to be differentiated by age, gender and other markers. This method has various advantages over traditional approaches, which investigate sleep behavior through surveys or laboratory experiments. Test persons can participate in scientific studies in large numbers and without great effort. At the same time, thousands of objective data points on the real behavior of test persons are collected. Highly individualized analyses can be carried out over a longer period of time and risk profiles can be identified more easily, including for example behavioral changes due to corona. By adding context-triggered questionnaires ("You have just switched off your smartphone alarm. Are you still tired?") and wearables (e.g. recording pulse during the night), Murmuras is also working on additional methods to improve sleep research on a broad scale.