Smartphone apps can play a key role in fighting the spread of the Corona virus. The Infections can be traced back and further spread may be prevented early by sending alerts to users who were in contact with a person tested positive. In Germany, the app called “Corona-Warn-App” was developed by the Robert Koch Institute and was, as of 30 Oct 2020, downloaded more than 21 million times. The efficacy of the app depends on the number of its users. According to an Oxford study, in order to completely suppress the pandemic, 56% of the population need to use the app. But even with lower numbers above a minimum of 15% the infections and deaths can be prevented. While this implies that the corona app has an impact on the containment of the virus, there is still room for improvement to get more downloads.

To get more people convinced to download the corona app it is therefore crucial to understand: Who is actually using the corona app? What differentiates their behavior from those who don’t?

We looked at the mobility behavior of corona app and non-corona app users and also digital smartphone behavior. Which group travels more? Is it plausible that corona app users differentiate themselves from non-users through their high smartphone affinity? Who is using more social & communication apps? Who is rather consuming passive apps such as videos and games?

We looked at behavioral data of 668 participants, of who 290 had installed the corona app. The data was collected from July to September 2020 in Germany with the consent of the test persons. In our analyses we focused on the mobility behavior measured as distance travelled in km and diameter of the daily travel area in km. Second, we looked at the smartphone and app usage duration by app category.

To compare the mobility behavior of people with and without the corona app, we analyzed data points sent by their smartphones throughout the day. When looking at the average distance travelled per day, corona app users travelled about 4 km further than non-users (sum of all means of transport and on foot). 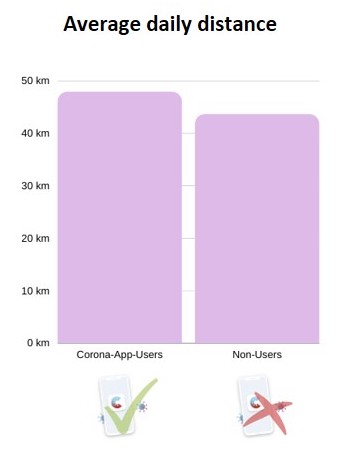 Apart from the total daily distance, we analyzed the diameter in which a person moves on a day. We defined the diameter as the distance between the two furthest apart locations on a day. A small diameter of 1km may imply that a person only stayed in her neighborhood, in close proximity to her home. In our sample, corona app users spent 22% of the in an area with a diameter of 1 km. In comparison, non-users did so on 29% of their days. Users without Corona App also made fewer further trips (>20km). 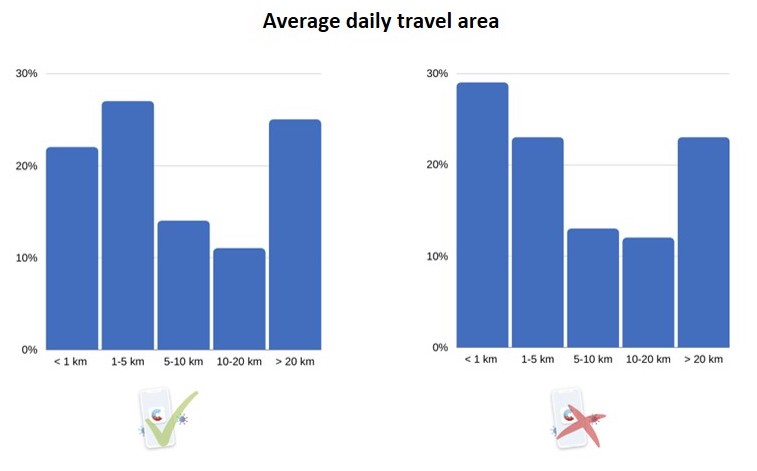 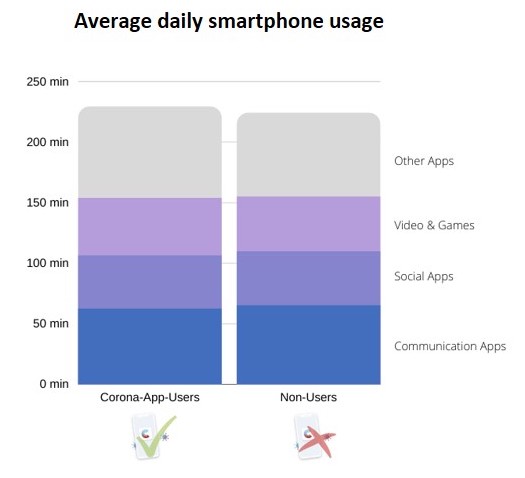 What the results tell us

It has to be noted that our sample consisted of predominantly people under 35 years and slightly more women than men, therefore, it doesn’t represent the general population. Still, our results have some interesting conclusions that can be further investigated: